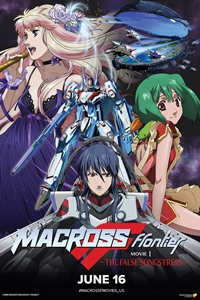 It is the year 2059. Following the near-destruction of the human race 50 years prior, humankind has embarked upon an interstellar emigration project. The Macross Frontier fleet is on its way towards the center of the galaxy when it encounters a hostile alien species known as the Vajra. A concert by touring popstar Sheryl Nome becomes ground zero of an attack where both flight school trainee Alto Saotome and aspiring singer Ranka Lee are caught up in the chaos.