The Tale of The Princess Kaguya - Studio Ghibli Fest 2019 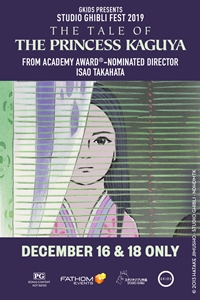 Join Fathom Events and GKIDS to celebrate the ninth and final title in Studio Ghibli Fest 2019 when The Tale of Princess Kaguya returns to theatres for two-nights only. A powerful and soaring epic, based on a legendary Japanese folktale, redefines animated storytelling from director and Studio Ghibli co-founder Isao Takahata. Experience Takahata's final film that was nominated for an Academy Award® and hailed as a masterpiece by critics.