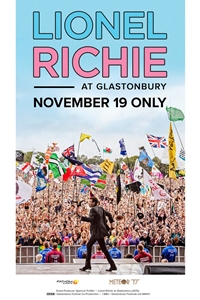 In an exclusive one-night event, the filmed version of veteran singer-songwriter Lionel Richie's iconic Glastonbury Festival performance comes to cinemas. In 2015, Richie performed for nearly 200,000 fans during the U.K. festival's distinguished Sunday teatime slot, reserved for music legends. See Lionel's performance at one of the most iconic festivals in the world on the big screen and sing along with favorites like All Night Long, Dancing o the Ceiling, and Hello! This exciting cinema event includes "The Road To Glastonbury"- An exclusive introduction and commentary from Lionel Richie with concert and documentary footage through his career to his inspiring performance at Glastonbury.