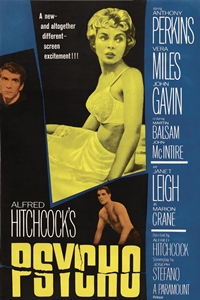 From director Alfred Hitchcock, the "Master of Suspense," this psychological thriller is the tale of a woman on the lam (Janet Leigh) who checks into the mysterious Bates Motel. The property appears to be deserted, except for the proprietors Norman Bates (Anthony Perkins) and his mother. Psycho gave audiences a whole new perspective on taking showers and became Hitchcock's biggest hit. "A boy's best friend is his mother."