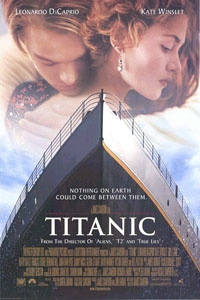 The journey of "Titanic" begins in the present, at the site of the ship's watery grave, two-and-a-half miles under the ocean surface. An ambitious fortune hunter (Bill Paxton) is determined to plumb the treasures of this once-stately ship, only to bring to the surface a story left untold. The tragic ruins melt away to reveal the glittering palace that was Titanic as it prepares to launch on its maiden voyage from England. Amidst the thousands of well-wishers bidding a fond bon voyage, destiny has called two young souls, daring them to nurture a passion that would change their lives forever. Rose DeWitt Bukater (Kate Winslet) is a 17-year-old, upper-class American suffocating under the rigid confines and expectations of Edwardian society who falls for a free-spirited young steerage passenger named Jack Dawson (Leonardo DiCaprio). Once he opens her eyes to the world that lies outside her gilded cage, Rose and Jack's forbidden love begins a powerful mystery that ultimately echoes across the years into the present. Nothing on earth is going to come between them -- not even something as unimaginable as the sinking of Titanic.